Christian Bookseller, What Is Your Priority — God or Mammon?

When I go into a Barnes & Noble bookstore, I know they will have not only good Christian books, but also books by “Christian” false teachers as well as books about false religions.  BUT, when I go into a “Christian” book store I should be able to be safe from false teachings of every kind because it is a “CHRISTIAN’ store.

However, that’s not how “Christian” books stores work.  The owners and managers of these stores are not concerned as to whether or not the books (and all other media) they sell teach false gospels or abject heresy; all they are concerned about is how much money they are making.

Believe it or not, a book store CAN choose what books to sell. They might not get as many customers if they sell only books by good teachers with solid biblical teachings, but they will be honoring the Lord.  Don’t these sellers have any conscience about what they sell?

Last week I had a Facebook discussion with the owner (?) of a new local “Christian” book store because an advertisement for the store came up on my news feed.  We used to have a couple “Christian” book stores in town, both of which eventually went out of business: one a “Parable” store [run by the manager (or owner) of the new one] and a “Zondervan Family Christian Store.”  I would go to these stores once in a while, but the more I shopped the more irritated I would get seeing all the horrible books being sold: these stores are minefields of false teachings! So I quit shopping at these places because I don’t want my money supporting stores which sell products which lead people into deception and all sorts of bondage to false teachings.

Let me show you the short interchange we had, starting with my first comment when I said why  I wouldn’t shop there: 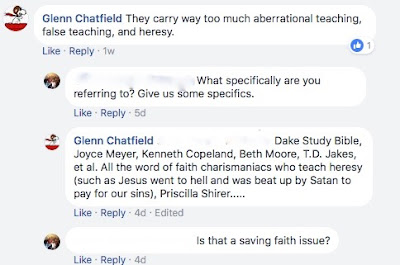 Notice that his only concern about false teachings was whether or not it was a salvation issue; no concern that the false teachings may only be spiritually dangerous, leading people into bondage to false ideas, etc.  (My comments got pieced because I keep forgetting that “enter” doesn’t take you to the next line, rather it ends the comment.  I could edit, I know, but found it easier to just keep going.) 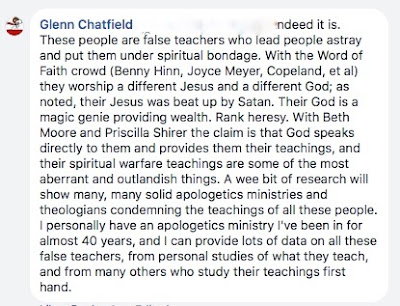 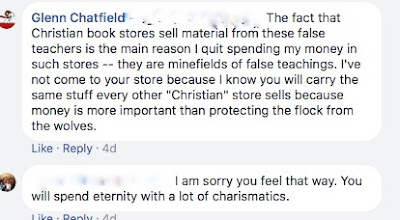 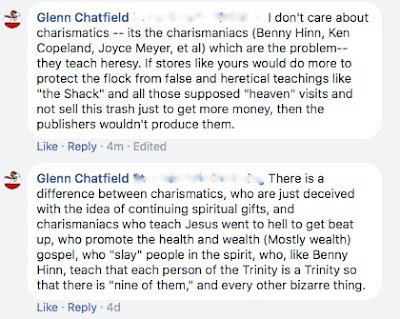 Notice the response: he’s sorry I “feel that way” rather than feeling convicted of helping enemies of God.  Also note that he only addressed the idea of “charismatics,” which I wasn’t even discussing, as opposed to the “charismaniacs” which I had to define for him (although I’d be surprised if he didn’t already know who that term applied to).

That was the end of the conversation.  He apparently couldn’t refute what I was saying, and he is obviously more concerned about making money than protecting the flock.  And this is a man who, with his previous store, I wrote to explaining why he shouldn’t be carrying the Dake Study Bible, for which I received no response, and noted that he continued carrying it years later.

Seriously, folks, how can a Christian justify making money by selling books by people who are unsound in their teachings, whether it be Word of Faith (many, many of these sold), modalist T.D. Jakes (heresy mated with Word of Faith), the Bethel’s and the Hillsongs, the Beth Moores and the Priscilla Shirers (who claim direct revelation from God for their false teachings), the New Apostolic Reformation false prophets and apostles, the trips to heaven and hell, et al, or even those who teach a false “spiritual warfare” which puts people in spiritual bondage? The list of horrid teachings found in such stores would be very lengthy and yet they are sold because the owner is more interested in money than he is in obeying God.  These booksellers CONTRIBUTE to the enrichment of all these corrupt false teacher; they CONTRIBUTE to the biblical illiteracy of the sheep, they CONTRIBUTE to leading people astray to false teachers, false gospels, and false Christs.

By the way, the same holds true for Christian Book Distributers (CBD), the catalog and internet supplier of Christian books — I haven’t shopped there either for a long time.

Of course those publishers of these horrid books are also just as guilty of seeking money over protecting the flock.

Buy your books from Barnes & Noble or through Amazon — at least they don’t pretend to be Christian!  I’d like to see every one of these so-called “Christian” book stores go out of business.

I really appreciated your distinguishing between charismatic and charismania. I've been in a charismatic fellowship and it wasn't remotely like the outright lunacy of the superlative apostles of the Hinn variety.

You probably wouldn't agree with my views on the gifts of the Spirit, but any discussion would revolve around understanding what the NT writers say about this, 1 Cor 12 to 14 in particular. Of course there is room for robust discussion of this amongst those who take the bible as their authority.

I have grown so very tired of the MacArthur Strange Fire type rhetoric, the needless labelling and indeed mocking of some very gody men and fellow believers who happen to be more keen for various manifestations of the Spirit. One thinks of the sniping currently going on at James White for cooperating with Michael Brown despite the fact they disagree on the gifts issue and have publically debated each other over it.

If people have got something wrong, you won't win them round by sniping at them.

I hope you will take this as encouragement!

I believe the gifts of the Spirit have all ceased. Most of the miraculous gifts, i.e. the signs and wonders, were to authenticate the Apostles' ministry, and since we no longer have apostles those signs are not needed. I think the most disputed "sign gift" is the gift of tongues, and according to Scripture this was a miraculous ability to speak another language without having learned it, while in the contemporary charismatic world there are "prayer languages" (never mentioned in the Bible) lots of gibberish where no translator is present (violation of Scripture), and schools/classes, etc teaching one how to speak in tongues!

I disagree that any discussion on the gifts must revolve around 1 Cor 12 and 14, and I find those passages often abused by both sides of the debate.

I disagree with your assessment of MacArthur's "Strange Fire" teachings. For the most part he is addressing the charsimaniacs, and making fun of false teachers that nature is what Elijah did at Mt Carmel. However, for the most part I think "sniping" can be left out of the debate because it detracts from the actual arguments.

I do thank you for your encouragement, even if we do have some disagreements in this area. I have a few charismatic friends and we often get into such friendly discussions.

The response you receive from charismatics, Glen, is typical of this religious movement who seek to add extra-biblical revelation to the Holy Scriptures. Most of it, I believe, is based solely on hyper-spiritualism and emotion/feelings.

I ran out of a Baptist church filled with a majority who label themselves charismatic. The pastor man was Assembly of god trained and was an attender/follower of the "Toronto blessing(?)" event that took place years ago. He also promoted individuals such as Smith Wigglesworth (who bodily abused people, claiming to heal them), IHOP and most of the NAR so called preachers and teachers. He allowed the "church" to engage in Bible studies from the likes of Beth Moore, Joyce Meyer, Kenneth Copeland, Todd Bentley, just to name a few, all the while promoting practices such as "drunk in the spirit," the "interpreting tongues- which in fact was jibberish and baby babbling, no foreign language at all, dream interpretation, visions, trips to the third heaven, all the while inviting in NAR pastor men to host "healing revivals." This pastor man was eventually caught in sin, lusting and pursuing married women, all the while his own household was a sexual mess. And also, I must add, that he promoted his wife as a special "prophetess" amongst us, as she was especially "anointed" with a spirit.

That church was a fiasco, and the divorce rate was quite high within that cult. I have experienced the most spiritual abuse, coming from charismatic land, and after leaving that abusive church, will no longer allow a "charismatic" to influence my faith in Jesus Christ, alone for salvation.

I will close with this fact: When I have a loved one pass away from this earth, of whom are faithful believers in Jesus, the Christ, the most abusive cards I receive via the mail, come from charismatics. Each and every charismatic writes these words, "I hope they knew Jesus," or "it is my prayer they knew Jesus." They have no clue as to the "jesus" they worship, all the while judging the rest of us who choose to read, study, and meditate upon the Scriptures for ourselves, not seeking a "charismatic" mediator to become a lord over our own lives.

I believe without a doubt, that charismatics are seeking followers for themselves, instead of pointing us to the true Jesus, LORD, of the Holy Word.

I will not be spiritually abused by a charismatic any longer, my freedom the liberty comes from Christ, as Jesus said, "All authority belongs to Me."

And Glen, if I may also add another fact concerning the abusive charismatic church....many of us are sick and tired of the "charismatic" praise band and the "duly noted anointed praise band leaders," especially when they stand up there on stage and judge the rest of us pew sitters. After the services, they would confront people and say, "You were really worshiping in the spirit today." There judgements were based on the number of times individuals raised their hands in the air, the amount of "swaying and dancing" they did while standing, and other "manifestation" that occurred while singing the same phrase one hundred times over.

And another fact, "When a believer chooses NOT to worship the praise band and perform for them," the cult will NOT like you very well..........for after all, your faith is dependent upon the "charismatic," duly blessed with extra special gifts.

It is a blessing to be free of all of the judgement, criticism, condemnation, and spiritual abuse coming out of the mouths and also the deeds of the charismatic church.

My freedom in Christ alone, has been renewed and strengthened. Praise Him.

I am familiar with every "movement," group, and teachers you mention, as well as so much of the events and problems. I've either studied it, lived it, or have friends who have experienced it. I couldn't agree with you more.