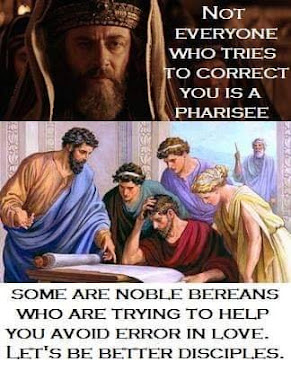 Sheol, Hades, and Gehenna: are there differences?

Solid teaching about the tithe. I’ve said too many times that Christians do NOT tithe. (The article also exposes Bill Johnson as a false teacher.)

The New Apostolic Reformation is an heretical teaching by false prophets and false apostles. Learn their language.

To Be or Not to Be Accountable.  False prophets need to be exposed, period.

Proof that the Pope does not represent Christ or God. The man has gone full-blown LEFTIST.

The Roman Catholic Church is more and more supportive of sexual perverts and deviancy. Proof that they do not speak for God. They really need to start excommunicating these so-called “Catholics.”  Especially Jesuits who are supposedly more devout!

Catholics have historically voted Demokrat, for some absurd reason. Well, this is what you get when you vote Demokrat, whether Christian or Catholic.

The blatant lies and false teachings behind the fraudulent Bible translation known as “The Passion Translation.” The video is long and I had to go back to it several times to finish listening while doing other things. However, the information and exposure of the fraud is well worth the time.

Clint Adams has a review of one of Jen Wilkin’s books. Just another example of her poor teaching.

About that “transgender” ELCA “pastor.”  A very good examination.

I keep warning you about Tim Keller.

Another false teacher I hadn’t previously heard of — Jennie Allen.

Andy Stanley is a vicious wolf.

False teacher Joseph Prince.  Followed by, false teacher Priscilla Shirer. And let’s just remind everyone that T.D. Jakes is also a false teacher, as well as a racist.

CRU (i.e., Campus Crusade for Christ) is on a death spiral.

A great argument against women priests/pastors!

Stay away from World Vision.

One bit of Mormonism I hadn’t given much thought to is their belief that God ordained the Fall. Well, in this regard they are just like Calvinists; Calvinists say God has foreordained everything!

What books would you recommend most in the study of Mormonism?

What are some political commentators you would recommend? I've heard of a certain Dr. Steve Turley. Is he any good in your opinion?

WOW! There re so many good books on Mormonism! Here are some on my shelf:
Mormonism: Shadow or Reality, by Jerald & Sandra Tanner. Available through the Utah Lighthouse Ministry. I real tome!
Okay, something smaller:
Reasoning From the Scriptures with the Mormons, by Ron Rhodes
Jesus Christ--Joseph Smith, by Floyd McElveen
Inventing Mormonism, by H. Michael Marquardt & Wesley P. Walters
What Every Mormon (and Non-Mormon) Should Know, by Elmond C. Gross & Lane A. Thuet.
Not Man Knows My History: The Life of Joseph Smith, by Fawn M. Brodie
.
I have given away most of my library over the past few years but still have plenty of Mormon stuff on my shelves because that was what started me in my apologetics ministry -- reaching Mormons.

As for conservative political commentators, one of my favorites is Dennis Prager. Never heard of Turley but I just googled him and he looks very interesting. I like Thomas Sowell a lot, and have had several of his books. Ben Shapiro is good. Dinesh D'Souza is one I read. Off the top of my head I can't think of the names!

What are some books you would recommend on Jehovah's Witnesses?

Here is a sample from the Turley guy:

Do you think Bill O'reilly is any good?

Now that you showed me a video I know who the guy is; another of my blog followers has sent me links to some.

I like Tucker Carlson much better. Bill O'Reilly is also good.

As for the JWs, Ron Rhodes has an excellent book on them also, "Reasoning From the Scriptures with the Jehovah's Witnesses."\

Another good book is an 8.5X11 of about 350 pages: "Jehovah's Witnesses: Their Claims, Doctrinal Changes and Prophetic Speculation. What Does the Record Show?" by Edmond C. Gross.

These are good ones to start with.