Stealing Sheep or Rescuing Them?

“Sheep stealing” has been the persistent cry of liberals, cultists and others who were preaching “another gospel.”  But the cry is hollow if the sheep is “stolen” from such a fold.  As a matter of fact, “stealing” is an altogether inappropriate word to describe what is happening.  The fact, in such cases, is that the sheep has been rescued from a “wolf” in shepherd’s clothing.  He has been enabled to see that the devil’s servants often come as “angels of light.”
Dr. Jay E. Adams, Shepherding God’s Flock, p.206
Posted by Glenn E. Chatfield at 6:01 PM 1 comment:

Email ThisBlogThis!Share to TwitterShare to FacebookShare to Pinterest
Labels: False Teachers, State of the Church 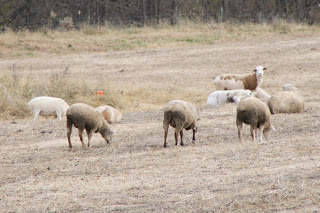 It is not shepherds, but sheep that make more sheep.  Shepherds care for them.  It is the job of a pastor/teacher to equip, train and feed the flock.  But as one of the sheep of God which he is too, he also must evangelize; and as an example to the flock he is to take the lead in evangelizing.  But he cannot, and must not attempt to, do the evangelistic work of the congregation for them.  He, as one man limited in time, space and energy, cannot be where they are with all of the opportunities that are afforded to each one of them alone.  Indeed, as he serves as a teaching model of the evangelist and as he concentrates on helping to equip all of the saints for their work of ministry (Ephesians 4:11, 12) as God intended, ultimately more evangelistic activity will take place than he possibly could engage in on his own.  In addition, the blessings of participation and personal growth for each member of the congregation that this will bring will be incalculable.
Dr. Jay E. Adams, Shepherding God’s Flock, pp.24-25
Posted by Glenn E. Chatfield at 7:13 PM 1 comment:

Email ThisBlogThis!Share to TwitterShare to FacebookShare to Pinterest
Labels: Evangelism

Perverting the Bible for Homosexuality

Great quote from Walter Martin today on Apprising Ministries:
The time has come to take off the velvet glove with these jokers, and tell people what they are really up to, and this is what they are up to: They are up to the perversion of the text of the Holy Scriptures.
We are more concerned in the United States about the rights of homosexuals than we are about Who Jesus Christ is and what He did.
We’re more concerned with social issues in the United States in the Christian church denominationally than we are with those who are dying in their sins without the Gospel. We are very concerned about everything except the things that really matter.
…the only way you can deal with this is to bring it out in the open and let people see it for what it really is: It’s filth, because it is attacking at the very core the character and nature of holy Scripture, and making the Scripture say what the Scripture does not say…
Posted by Glenn E. Chatfield at 4:39 PM No comments:

I was cleaning off one of my book shelves today and came across a pamphlet by David F. Wells titled, “The Bleeding of the Evangelical Church.”  The point of the pamphlet was that the whole market-driven, seeker-sensitive movement was wrong and leads people to a false Christianity.  I had highlighted three quotations when I read this pamphlet back when I acquired it in 2001, and I am sharing these citations here, so as to give some food for thought.
“The Church is sanctioning the idea that when someone comes in its doors its okay to view that person as a consumer, somebody who is going to attempt to hitch up a product to their own felt needs.”
“Consumers in the market place are never asked to commit themselves to the product they are purchasing, as a sinner is to the Christ in whom belief is being invited.”
“For what succeeds in this world is not necessarily what is true or what is right.”
Posted by Glenn E. Chatfield at 6:30 PM No comments:

Email ThisBlogThis!Share to TwitterShare to FacebookShare to Pinterest
Labels: Emergent Church, Market-Driven, State of the Church

I just finished reading an excellent book by Norman Geisler & Ron Rhodes titled, “Conviction Without Compromise.”  I highly recommend it.
One of the lessons at the end of the book is, “There is no true unity without unity in the truth.”  I think that says a mouthful, and should be heeded by those in the Emergent church movement, not to mention everyone else.  Too many people are willing to have “unity” at the expense of solid doctrine.  It can’t be done.
An illustration used by the authors was about worship:
“Jesus instructed us to worship God ‘in spirit and in truth’ (John 4:24).  So there is no true worship without worship in the truth.  Because worship means ‘honor’ or ‘worth-ship,’ one cannot truly worship God without speaking the truth about Him.  Surely parents would not be honored by a child who spoke falsehoods and lies about them.  Neither can God be truly worshiped by songs consisting of words that are not doctrinally sound or that speak falsehoods about Him.  Likewise, no matter how good one may feel about a so-called worship or spiritual experience, if it is not based on and does not express truth, it is not a true experience of God.  We conclude, then, that there is, in truth, no true unity without unity in the truth.”
This reminds me of those who claim to be Christians while at the same time claiming that God is okay with homosexual behavior and abortion.  They are telling lies about God.  God is not honored by such people who refuse to tell the truth about Him.  Of course there are many other lies supposed Christians tell about God, but these two seem to be the most prevalent among those who are liberal in their belief system.
Remember, God is not honored by worship when those who worship him tell lies about Him.
Posted by Glenn E. Chatfield at 4:04 PM 1 comment:

Another Marian Shrine Sanctioned by Rome

The newspaper this morning carried a short AP article telling us that the Roman Catholic Church has recognized a chapel in Champion, WI, as the only site in the USA which had an official siting of the Virgin Mary.  The story goes that Mary appeared three times to Belgium immigrant Adele Brise in 1859, and since that time Catholics have visited the site to pray for miracles.   I found an article with the full story at
http://www.catholic.org/hf/faith/story.php?id=39511
Questions for the Romanists:
1.  One woman says she saw Mary appear to her three times.  Were there any witnesses?  No.
2.  How was Mary identified?  Surely no one knows what she looked like since there are no photographs of her.  So how do we know it wasn’t some other woman coming back from the dead claiming to be Mary?  How do we know it isn’t demonic?
3.  Can you show me in scripture where we are supposed to be talking to the dead?  Doesn’t Scripture instead speak against necromancy?
4.  Why is it that Marian “visions” almost always give unbiblical messages?  Even in this one “Mary” identified herself by the unbiblical title “Queen of Heaven” with the unbiblical claim that she “prays for sinners.”  Isn’t it interesting that “Mary” always repeats Roman Catholic dogma?
5.  The vision supposedly told Adele to “Gather the children in this wild country, and teach them what they should know for salvation.”  Since Adele knew only the Romanist idea of salvation, wouldn’t Satan rather have that version being propagated?
The Romanist Church claims that it “judges apparitions on the basis of their consistency with Sacred Scripture, Sacred Tradition and the teachings of the Church...”   However, they really only judge in relation to their tradition and teachings, and never on Scripture.
Here’s the bottom line:  “For even satan disguises himself as an angel of light.  So it is no surprise if his servants, also, disguise themselves as servants of righteousness.” 2 Cor. 11:14-15.
The vision seen by Adele Brise, if she did see one, was not - and could not have been - the Virgin Mary.  There is no biblical warrant for such visions.
And lastly, it is no more than superstition for Catholics to go to any particular place to pray for miracles; it doesn’t matter where one prays.
Posted by Glenn E. Chatfield at 11:57 AM 7 comments:

Email ThisBlogThis!Share to TwitterShare to FacebookShare to Pinterest
Labels: Killing, War
Newer Posts Older Posts Home
Subscribe to: Posts (Atom)
Alluding to the watchman of Ezekiel, I use my own instrument as the watchman's tool to alert of danger. Don't bagpipes get everyone's attention?