So Many Things to Think About! 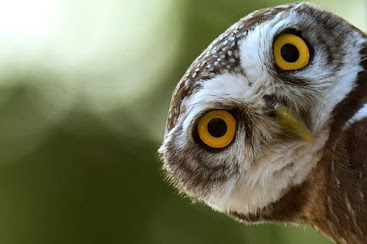 I’ll begin with a good one: Adam Named Eve.

Christians can never endorse “transsexuality.” That ideology is anti-God.

Here’s one for fun: This is very clever the way a musician pokes fun at a false “prophetess.” She looks possessed to me.

The Vatican has come out against same-sex “mirage.” It’s about time.

Now to the serious.

When you live the lifestyle of the rich and famous false teachers/fake Christians, you have your own jets and travel on their congregations’ dollars. And of course God tells them to buy them.

Another example of the un-Christian and harmful ideology of the heretical and apostate Episcopal Church.

Satan is brainwashing the children.

Beth Moore leaves Southern Baptists.  Interesting. More on the topic.  Dwight McKissic, a fake “pastor” who is leaving the Southern Baptist Convention because some DBC bigwigs say Marxism is incompatible with Christianity, has made the follow gross and blasphemous tweet about Beth: 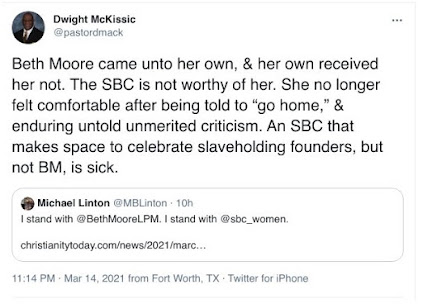 Andy Stanley is more about himself than he is about being a pastor or teachers.

J.D.Greer continues to prove he is a false teacher.

Michael Brown continues to demonstrate why he should be avoided; he defends false prophets.

Tim Keller continues to convince me that he is a fake Christian.  Here’s the 4-minute audio. Notice how he claims those of us who want a non-Demokrat president or want to defend against LEFTIST ideology, “Christian Nationalists.”

Does your church preach “inclusivity” and “white privilege”? If so, run from that false church.

THIS is what happens when Critical Race Theory is allowed to invade the Church.

The Southern Baptist Convention is becoming more and more LEFT. Here we have an SBC “pastor” — Thabiti Anyabwile — telling you if you think Biden’s election was illegitimate, then you have “spiritual cancer.” This “pastor” should be booted out.

We’ll end as we began and that is with something GOOD!

A good roundup of the usual goats. McKissic is a blasphemer.

The fact that Beth Moore is a female putting herself in the position of a teacher is all the proof we need that she is a false teacher. She disqualified herself from ministry (1 Timothy 3).

Glenn, thank you for sharing a link to my article.

Sharon,
You are quite welcome. Good stuff needs to be shared!

This "Carolyn" who is taking offense isn't me, me being your usual Carolyn who posted at March 17, 2021 at 3:27 PM, the same usual Carolyn who has been posting here at TWB (and at Jill's blog) for years, and who loves our dear sister Martha (the real Martha who believes in a literal 6-day creation, not the person who tried to impersonate her - Martha... hello dear sister, I miss hearing from you!!!!!!!!) :)

I am the same Carolyn who also posted about Driscoll and Keller, etc, in your Hodge Podge post. I could go through every blog post of yours since I found TWB and tell you which are mine, because I know what I have said here throughout the years.

Regarding Beth Moore, I, your usual Carolyn, have this to say: I agree WHOLEHEARTEDLY Unknown's post about Beth Moore. BM taking on the role of a woman who preaches to men means she is a false teacher. Period. She is grossly disobedient to 1 Tim 3 and Titus 3, which state that only men can preach. BM is utterly unrepentant. This has NOTHING to do with women being "inferior" to men. I am never offended by the truth of God's word and anyone who speaks the truth does not offend me.

Either this "Carolyn" is just a different person than me, or is someone impersonating me (poorly at that).

Just wanted to let you know.

Blessings to you and Jill,

By the way, I no longer post comments at any blog except yours and Jill's. So if you ever see comments by a Carolyn anywhere else, it's not me!

Thanks for clearing that up! That last comment by "Carolyn" had me scratching my head!

Glenn, obviously Carolyn @March 19, 2021 at 11:13 PM is a different Carolyn than me! Yikes, her comments are ridiculous!

Please refer to her as Carolyn2. :)

I, your usual Carolyn, thinks Beth Moore is IN SIN. I don't listen to BM, I don't follow BM, and I don't have the feminist beliefs of BM.

To the REAL Carolyn,

Okay, with a quick foul up on the other computer that decided to publish rather than delete and would let me delete anything, I have now removed all comments from the fraud!l

Those comments had me thinking you were being Jeckle/Hyde, or drunk or on drugs!!!!!

I'm glad you exposed the fake.

LOL, no Jeckle/Hyde or alcohol or drugs here. Just a Biblical, sound mind.

It reminded me of the person who faked being our dear Martha. That imposter did a terrible job. It was so obvious.

For the record, if you ever see some "Carolyn" here claiming any fondness for Beth Moore, or who thinks it's ok for women to preach, etc, that SURE AS THE SUN SHINES IS NOT ME!

I looked at Gracepointe Church (Nashville's website as referenced in the woke church article. On their website, the executive staff all listed their preferred pronouns, currently indicative of the woke crowd, but rare for evangelicals to do this. Their Google reviews are a mishmash between their true fans and those who call them out for their apostasy. Not surprisingly, they don't regard the Bible as inspired/infallible, and have other apostate beliefs. A true goat pen!

It always amazes me how the Enemy manages to deceive people from within different institutions, churches, leaders, materials, etc. The church itself is under attack and many Christians don't even realize it! Far too often, people open the door and unwittingly invite him in! I used to attend a church that used Beth Moore's teachings in its women's ministry and regularly sang Hillsong and Bethel songs in its contemporary service. After we left, things continued to go downhill spiritually. Where is the discernment?