On 11 September 1857, Mormons, pretending to be Indians, along with some Indians they talked into joining them, massacred over 120 men, women and children from a wagon train at a location in Utah known as Mountain Meadows.  This massacre is little known outside of those who study the history of Mormonism.

The real dastardly thing about the massacre was that after days of attacks the Mormons and Indians (few of the latter) were losing too many men and were not making any headway.  So under orders from higher ups, John D. Lee approached with a flag of truce, told the wagon train members that the Mormons were there to protect them from the Indians, and the only way they could do that would be to have all weapons put into a wagon, have small children in another wagon, the women and other children walking in a separate group from the men, and all would be escorted to a safe location.  Instead, once they were all disarmed and separated, the Mormons killed them all except for the small children who they believed wouldn’t be able to tell the story — the children were then given to Mormon families to raise.

In 2007 a movie, September Dawn, was made about the massacre.  Overall the story it told was factual but, as normal with Hollywood, they put in some characters which weren’t there (and a wee bit of exaggeration used with the tirades of the “bishop” in the story) and left out some important parts.

The movie never showed around here, and I understand it was only out for a very, very short time; I believe this was due to pressure from the Mormon Church.  However, the DVD was released in 2008 and I purchased it.  I found it amusing that it got an “R” rating (probably due to pressure from the LDS) for violence, when so very many PG-13 movies have even worse violence!

In order to add some drama to the plot the script includes a “Romeo and Juliet” love story.  But they really didn’t show that the wagon train was under attack for several days before the dastardly deed was done; just one comment had one of the besieged talking about how it “has been four days.”  The movie showed the first attack, and after that attack the members of the wagon train talked about being low on ammunition, but they weren’t low until after days of being attacked.

A lot more details bothered me by being lacking or being over-done (and some being anachronistic), but overall the story was an excellent way to alert the public to the REAL history and beliefs of the Mormons.

For those interested in some thorough examinations of the Mountain Meadows Massacre, I recommend the following:

Mormonism Unveiled or Life & Confession of John D. Lee (with an appendix history of Brigham Young).  This book goes a very long while before discussing the massacre, but the reason for Lee writing it was to expose all the perpetrators of the massacre before he was executed as the scapegoat.

Blood of the Prophets: Brigham Young and the Massacre at Mountain Meadows, by Will Bagley.  He has some exposure in the extras on the DVD. 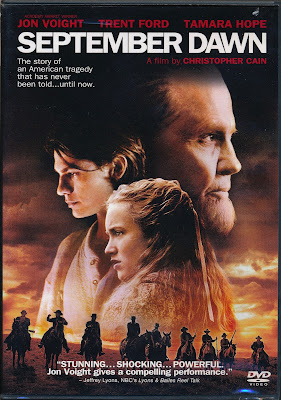 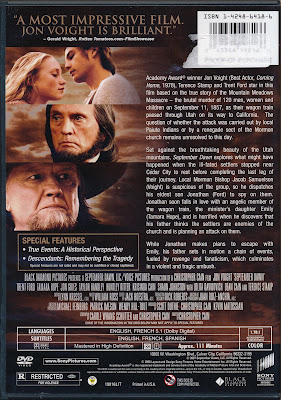