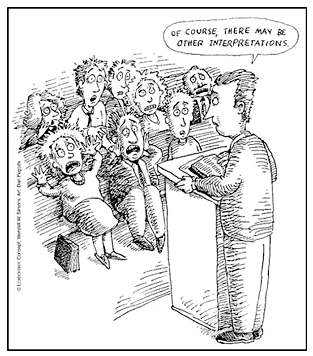 Sometimes I wonder if there will ever be a week without too many news items about the state of the Church.  It is really difficult to keep up with it all, which is why it is good that so many apologetics ministries are busy exposing all this stuff.

The big news has been Tony Campolo’s recent statement in support of “committed” same-sex relationships.  I’m really not surprised; after all, he was one of the first false teachers I exposed just a few months after I started this blog, and a few months later exposed his advocacy for homosexuals.  Michael Brown has an excellent open letter to Tony.

Homosexual activists who also claim to be Christians continue to lie about what Bible teaches in regards to homosexuality, which often leads weak/immature Christians astray.  One of their attacks is the Bible’s interpretation of the Greek word, “arsenokoites.”  I actually addressed the origin and meaning of this word in a previous article.  This article does a good job responding to arguments about the word.  Great information for your apologetics file in regard to the cult of homosexuality.

The pope continues promoting Roman Catholic supporters of homosexuality.  I just see this as more proof that he never speaks for God.

I have often said that those “Christians” who promote homosexuality and same-sex fake marriage are preaching another gospel and worshiping another Christ.  One particular blog-trolling false teacher who is 100% behind fake marriage just rails when you suggest he is preaching false gospels and false Christs.  Denny Burk has an excellent article where he cites an Orthodox priest saying essentially the same thing I’ve been saying.

So what excuse can Willow Creek have for engaging an open homosexual, who is an advocate for the homosexual agenda, as a worship leader?!? [link gone by 7/14/18] He claims to be celibate, but then that would mean he isn’t a homosexual, because a homosexual is one who is practicing the behavior; otherwise he is just a man struggling with homosexual desires.  (A thief is no longer a thief if he no longer steals.)  Willow Creek has been in the apostasy of market-driven philosophy for decades.  Now they say their “gay” worship leader is “held to the same standards that we have for everyone in our church.”  Obviously those standards don’t include not being allowed to advocate for false teachers.

Speaking of the market-driven/seeker-sensitive heresy, Rick Warren’s Saddleback Church is seeking $71million for another expansion!  I guess he needs a larger goat pen.

A thought-provoking article about who restrains the Holy Spirit.

OH NO!  Another Roma Downey show to promote more of her false teachings.  The comment section on the article is also quite interesting.

A blogger recently emailed me this link to a very well done article in regards to one of my blog posts about the Sabbath.  He is an ex-Seventh-day Adventist.

I never realized just how widespread some of Bill Gothard’s teachings have reached.  One particular insidious teaching is the claim that Christians have no rights.  I was directed to an excellent article examining the foolishness of such a claim, and the dangers this teaching presents.

So, knowing the great harm brought into the Church by false teachers, should we love them?

As usual, good roundup. From your other (later) post, Pat Robertson is an ignoramus. There's a Proverb that says even a fool, if he keeps silent, is thought to be wise (17:28). PR needs to heed that wisdom.

Hybels and Warren, of course, they've been off the mark for decades. My husband and I have warned pastors all over our area about the danger of following those two, only one pastor (to our knowledge) listened, an AG pastor. Now the chickens are coming home to roost, God's wisdom that He gave us is being vindicated. Judgment begins in the house of God. Those who promoted those two (RW/BH) need to repent. Same goes for those who wrongly promoted Downey. And no, we do not need to love false teachers.

Not shocked about Campolo (another one who was never on the right path from the get go) nor the push to normalize what God calls an abomination. Good is now evil, evil good; light dark, dark light, bitter sweet, sweet bitter. A total inversion of God's truth.

About "Christian rights" - thank you for that post. I'm reading it, and something the author said was exactly what I said a couple weeks ago: that believers unfortunately conflate our standing before God (vertical) with our standing before each other (horizontal). Before God we have no rights, we only deserve condemnation for our sins, but by His grace, can receive salvation in His Son. However, with regard to one another, we do have rights. Yet many pastors say that believing you have a right is pride, and they back it up with the "we deserve nothing but judgement for our sin" concept (as exampled by the references to Dan Lenigan). Yet that is wrongly imposing the vertical on the horizontal. Scripture is clear, humans do have rights when it comes to our relationships with one another, and even the NT says "owe no man a debt but love" (Rom 13:8). That means we owe each other a huge debt: the debt of love, which is the sum total of the Royal Law, loving neighbor as self (James 2:8). [Think of that for a minute, if we are to love others as self, then if we incorrectly believe we have no rights, then we would then see others as having no rights either, and that would be carte blanche to sin against them at will.] Anyhow, with that love comes having our own rights and respecting the rights of others. If humans had no rights, then there would be no need for civil or criminal law in society, for Matthew 18 discipline in a church (right, when your brother sins against you, go to him... that charge doesn't make sense if you have no rights), or for parental supervision in families (making sure each child respects adults and their siblings).

Anyhow, in that article, the explanation of turn the other cheek was also excellent. It definitely does not mean being a Christian doormat. It means just what the author said. The author is also correct, that those who say believers have no rights, they often retain their own "authority rights" over you! This type of thinking enables abuse by those in power. Think: obviously Gothard, but also Driscoll and those who circled the wagons around him while he abused many people, with no repentance ever demonstrated.

Finally, on a positive note, I read that Chandler and TVC elders legitimately apologized to Karen Hinkley, openly admitting their wrongdoing. Praise the Lord! That is a demonstration of genuine repentance on the part of a leadership that had greatly sinned. What a blessing for us to see this, given how many other major evangelical scandals have yielded no such fruit. The most that is usually seen is weak equivocating at best.

That article about rights was so thorough, which is why I liked it. Gothard brought so much false teaching into the Church that it is tragic he is so well beloved by most in the Christian home-school movement, the very people who helped spread his false teachings.

Yep, I saw that article about Chandler's apology. Good to see.

Another Gothard issue - though I don't think he caused it, but he definitely propagated it: blame the victim. Given the evangelical scandals of late (BJU, Duggar, SGM, TVC, Driscoll, etc), it seems many in the church have been siding with the perpetrators of sin/crime, and forcing victims into a "sweep it under the rug" (ie: covering up sin instead of exposing it), faux forgiveness/reconciliation situation (demanding they "forgive" and "move on" without the perpetrator genuinely repenting and facing necessary consequences... crocodile tears and equivocating are not markers of repentance). The sins are never properly dealt with and the victims are left bereft of justice and healing. This is "cheap grace" and fake unity. It, is a STENCH in God Almighty's nose, an arrant failure of leadership (whether it is parents or pastors/elders), and those who have done this will answer to God.

This is why I am very glad to see Chandler/TVC do what they did, not only to right the wrongs that were done to Ms. Hinkley, but also, to bring a good public testimony back to the church.

When the sin is a crime, Romans 13:1-5 is our passage. We are to obey this passage, and trust that God will handle things justly for the perpetrator. The government is the one who God has entrusted to handle sins that are crimes, not parents and not churches (verses 3-4) or church organizations.