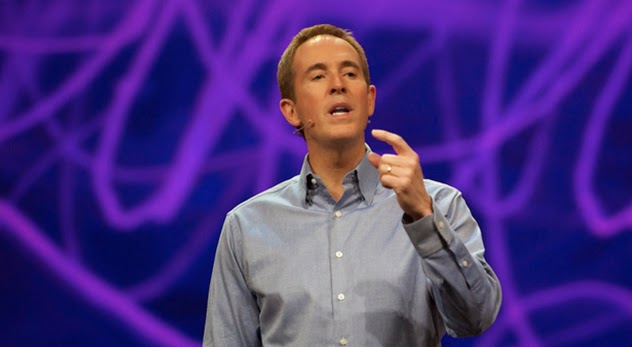 Andy Stanley has often been a subject of the “Random Aberrations, Apostasies, and Heresies” entries because of his eyebrow-raising teachings.  I want to review some of these teachings as a lead-in to today’s commentary on a very recent incident.

Stanley intimated that the sin of homosexuality isn’t really a problem.

When Stanley is challenged on the previous issue, he gets antagonistic.

Stanley thinks President Obama, who is possibly the most ungodly president we’ve ever had, should be known as “Pastor in Chief.”

Stanley has a book with some very questionable teachings.

If Christians do not want to participate in a same-sex fake wedding, Stanley says they should “leave Jesus out of it.”

Stanley endorsed the “Son of God” TV series with its bad teachings.

Stanley’s teachings as to why God became human are very troubling.

Andy thinks pastors should stop using the phrase, “the Bible says,” so as to not put off skeptics.

Stanley’s new book about “love, sex and dating” leaves a lot to be desired.

Stanley had a new sermon series based on half of a verse, and which claims Christianity has been corrupted by “being controlled by sacred places, sacred texts, sacred men, and sincere followers.”

More recently, Stanley says you will live a better life if you just follow Jesus’ teachings, even if you don’t believe Jesus is the Son of God.

So now let’s look at the most recent incident.

According to an article in the Christian Post, Andy Stanley thinks that “Churches Should Be ‘Safest Place on the Planet” for Gay Youth.”

Really?  A “church,” i.e., a Christian assembly, is a place for Christians to meet and NOT a place to aid and abet sinners.  If “gay youth” come into the assembly, they should be told in no uncertain terms that homosexual behavior is a sin, and that one cannot seriously claim to be a Christian while remaining in abject rebellion against God by ignoring what He says about sexual immorality in general and homosexual behavior specifically.   If the “gay youth” has no intention of repenting of their sin, then they are not interested in the Christian faith.  One must change their identity from being “gay” to being “Christian” — they can’t be both.  Besides, it isn’t as if there is a large number of “gay youth” which will even be interested in church — the total population of people claiming to be “gay” is only 2-3%!

That’s a major problem in the Church today: EVERY CHRISTIAN should have the same consensus about fake marriage—GOD’S consensus!

Stanley suggests that churches should “take a break” from the culture wars for a year, but the problem is that the culture war is directed AT Christians and the Christian faith, and we must defend where the battle rages.  This reminds me of a quote often erroneously attributed to Martin Luther:  “If I profess, with the loudest voice and the clearest exposition, every portion of the truth of God except precisely that little point which the world and the devil are at that moment attacking, I am not confessing Christ, however boldly I may be professing Christianity. Where the battle rages the loyalty of the soldier is proved; and to be steady on all the battlefield besides is mere flight and disgrace to him if he flinches at that one point.”

Since unbelievers outnumber true Christians to a large degree, the nation wouldn’t feel any different, but the Church might have more credibility. However, then he says,  “So basically, if we would just be better Christians, everything we would like to see changed for the most part would change.”  Oh, really?  IF the people of Christ begin acting like Christians should, then all the bad stuff in the world will change?  Abortion will end?  The homosexualists will stop forcing Christians to approve of their lifestyle? Muslims will stop beheading Christians?  The U.S. government will cease turning socialist? ETC?

The problem is that everyone in the Church could change their behavior to be more “holy,” but behavior is only the working out of correct beliefs.  When most of the Church has false teachings, the behavior will be in accordance with the false teachings.  (For example, when a church teaches that homosexuality and abortion are okay with God, then sexual immorality of all types becomes okay.)

Andy Stanley continues to swing more and more towards affirmation for those practicing homosexual behavior.  Which, really shouldn’t be surprising considering how liberal his teachings are becoming.  The Church should quit pointing to Stanley as a teacher worth following.

Wow, Andy Stanley is apostate. I admittedly don't know much about him, but this is just a dossier of false teachings on his part. His most recent statement is wickedness. Mark and avoid this wolf.

I also don't know much about his father, Charles. I've never looked much into him. Is he on the mark, or the tree from which that bad apple fell not far?

Well, I haven't read Charles Stanley for ages, and haven't heard anything bad about him. I'm hoping he's grieved by his son's actions.

Yes, the few people I have heard speak about C Stanley said he was decent. I hope that is true, and as you said, that he's grieved over his son's error.

How troubling to read. Dr. Charles Stanley has been teaching/preaching the Word for years. Makes one wonder how Andy got SOOO far off course. Obviously wasn't following the teachings of his dad..??.

Hi Glenn,
For some info on Charles Stanley, go to lighthousetrailsresearch.com.
Keep up the good work!
Laura

P.S. Type in Charles Stanley in the search tool

I remember now about the "in Touch" ministries stuff, but I don't hold that as Stanley's teaching, rather I see it as irresponsible for not keeping his organization accountable for what they print.

The other stuff I wasn't familiar with. Looks like Charles Stanley is buying into the whole contemplative movement. SAD.

Might I suggest reading the article at the link below and then the comments of Andy's defenders that follows. They may address some of your concerns about Andy.
http://juicyecumenism.com/2014/04/17/andy-stanleys-troubling-new-sermon/

I read that article when it came out. I'm not sure what concerns you think are addressed. Andy Stanley has continued more and more towards apostasy and emergent leanings. If you look at the labels on the right side and select his name, you will see all the posts which reference to him in some way about his unbiblical ideas.

Thank you for keeping us up to date on Andy's false teachings. I was at Northpoint for 6 years actually leaving the week before the infamous "When Gracie Met Truthy" which I watched online and knew that one was not loving the homosexuals, the ex-wives or the children. I personally met with Andy twice asking him to follow Matthew 18 and 1 Corinthians 5 for a Christian-professing husband that was practicing adultery and was a full member of Andy's church. Andy had preached on 1 Corinthians 5 in a message called "Judgment Call" where he said it was not his job or the job of the family to follow 1 Cor 5, but the job of the small group leaders. In my second meeting, I asked Andy if I could take the matter to the elders, and he said no that he had the final say.

As far as other false teachings,
He preached on divorce and remarriage in the Hard Sayings of Jesus series but after preaching God's not so popular message, he said that he tells his pastors that if the couple has waited two years after a divorce that they are free to marry them. My husband who had unbiblically divorced me took Andy's word as the green light to secretly to us (his family of born again believers) get married to the woman he was sleeping with after the church baptized her the week before. They got married on Easter weekend and had a party on Good Friday.

He preached on the parable of the talents, read where the worthless servant will be put into outer darkness where there will be weeping and gnashing of teeth and then stretched out his hands to the audience and told them "don't worry, that doesn't mean hell!". My husband said that he now knew that he would go to heaven but be punished there!

He said he wanted to preach straight through the book of Acts. I spent an entire Saturday praying for him to have the courage to preach Acts 5. When I got to church, Andy skipped the chapter.

More recently (since I left) in April 2012, I watched a sermon where in the beginning of John where the Word made flesh is really speaking about Jesus, Andy paused to explain the the word "Word" meant the Greek idea of content and cosmos. I listened to him say it over and over since I couldn't believe it. Isn't that really the definition of "world"?

He has mocked holiness even using the playing the little violin hand gesture as he did it.

He has said that he doesn't hear from God. The first book I read on hearing from God (after I had heard the still, small voice) was Charles Stanley's book about listening to God. Didn't Jesus say that His sheep know my voice and they follow me? He speaks to His sheep in many different ways. I don't believe that Andy is born again. How can a pastor speak to his people when he is supposed to be the conduit for getting God's message out to the other sheep. Doesn't the Bible say that we are to speak the words that God wants us to speak? Also in Ezekiel 2 and 3 it says that we are to eat the words of God and say what His message is and that if we don't their blood is on us, but that if we do and they refuse to listen then we are obedient servants of God.

We are to be Bereans testing everything we hear as to whether it agrees with Scripture. Though the web site says (or maybe used to say) that they believe in the inerrancy of the Scriptures, that obviously is not put into practice. Andy tells people what their itching ears want to hear and that does not include genuine sorrow that produces repentance that produces acts proving repentance and faith that shows the regeneration of the heart.