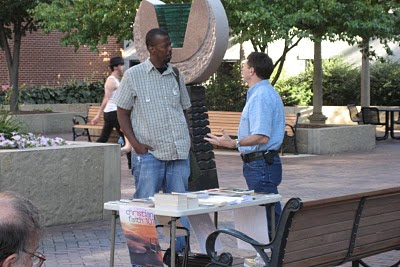 Last night I began reading a new book I picked up in April at the St. Louis Conference on Biblical Discernment. The book is a new one by Ron Rhodes, titled 5-Minute Apologetics for Today: 365 Quick Answers to Key Questions. It is designed as a daily reader, one page per day, but I never do those things - I just read right on through.  If you aren’t familiar with Dr. Rhodes or his Reasoning From the Scriptures Ministries, you are missing out on some excellent apologetics teachings.

Anyway, I read the first 15 days last night and came across a couple items I really wanted to share with my readers. The following is Dr. Rhodes’ entry for Day 11, Non-Rock-a-Boatus:

Many Christians today seem to be secret-agent Christians who are afraid of blowing their cover before an unregenerate world. Such Christians apparently have a hideous disease called non-rock-a-boatus. This disease has so effectively neutralized Christians that the cancer of false religion has spread at an incredible, unprecedented pace in this country.

Many Christians are so fearful of rocking the boat that they clam up and keep their Christianity to themselves. They think that if they speak out for Christ and for Christian values in this predominantly anti-Christian culture, they may offend someone or perhaps be ridiculed and embarrassed.

If this disease continues unchecked, we can count on the continued spiritual deterioration of our country. If Christians do not act, the followers of false religions will. The war is on - and we Christians will be soldiers in the midst of the conflict or casualties left behind.

The task cannot be left in the hands of the professional clergy. The challenge is too massive for church leaders alone. The involvement of every Christian is necessary if the growth of false ideas in this country is to be turned back (1 Peter 3:15; Jude 3). The task begins with a single person - you. If you really want to see things get better in our country, why not take the first step - you, without waiting for others to act - and commit to being an agent of change (see Mathew 28:19; Acts 1:8)?

Please note that the context is slowing the decline of the spiritual condition; Rhodes does not believe we can make the country a better place, rather he believes, as do I, that it is possible to reach more people with the truth if we get active about it. We need to put false teachers out of business as much as we can, rather than sit by and watch our churches collapse spiritually. Of course we know we will never be 100% successful because Scripture tells us of the spiritual decline in the last days. But we can certainly slow it down! Dr.. Rhodes tell us how to do this in the last paragraph of his entry for Day 10, Contend for the Faith, discussing Jude 3.

How can you and I contend for Christian truth? The word translated contend (Greek: agonia) was often used in New Testament times to refer to competition in athletic contests. The English word agony comes from the noun form. The idea behind the word is of an intense and vigorous struggle to defeat the opposition. Believers are to engage in an intense and vigorous struggle in defending Christianity.

Let’s all get out there and CONTEND!
Posted by Glenn E. Chatfield at 9:00 AM

That's you doing street preaching in the above picture, right?

Ron Rhodes is one of my favorite apologists--you'll even find his ministry publicly linked on the side of my blog.

Yep, that's me at our old book table ministry.

Rhodes has long been one of my favorite apologists (even though he's Calvinist), and sitting in classes he teaches is a real joy.