The Episcopal Church and Satan 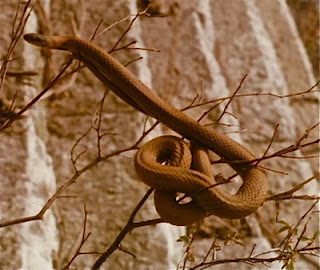 It seems like it’s a daily occurrence to see the Episcopal Church listening to the serpent and sanctioning homosexuality, regardless of what God’s Word has to say. The latest example is the Bishop of the Washington, DC, diocese, who has granted permission for Episcopal goat-herds to perform same-sex “marriages.”

According to the Christian post (http://www.christianpost.com/article/20100305/episcopal-clergy-permitted-to-wed-gay-couples-in-d-c/index.html)[link gone by Feb 2020], Bishop John Bryson Chane made the announcement Thursday. "Through the grace of Holy Baptism, there are no second class members of the Body of Christ. We are of equal value in the eyes of God, and any one of us may be called by the Holy Spirit into holy relationships as well as Holy Orders." As if same-sex “marriages” were holy!?!

The article points out that Chane is joining Episcopal bishops in the states of Iowa, Vermont and Massachusetts “in permitting clergy to wed homosexual couples.” This is the result of the Episcopal Church national leadership approving “a resolution last summer allowing ‘bishops, particularly those in dioceses within civil jurisdictions where same-gender marriage, civil unions or domestic partnerships are legal’ to ‘provide generous pastoral response to meet the needs of members of this church.’”

“Chane has cited the familiar Scripture passage on loving your neighbor as yourself as one of the reasons he felt ‘compelled’ to offer the sacraments of the church to gay and lesbian couples.”

I wonder if he will feel the same compulsion to sanction adultery and fornication, and even prostitution? I would think that loving one’s neighbor would not include aiding them in their rebellion against God.

Chane also claimed, "[I]f one is fully initiated into the Body of Christ, the Church, then one has full access to all the sacraments of the Church, including marriage, ordination and consecration.”

But if a person is truly in the Body of Christ, wouldn’t they give up sexual immorality, especially that of homosexuality - which God calls an abomination?

Those so-called Christians, such as Bishop Chane, will be among those who will hear Christ say, “I never knew you; depart from Me, you who practice lawlessness!”
Posted by Glenn E. Chatfield at 5:31 PM

Email ThisBlogThis!Share to TwitterShare to FacebookShare to Pinterest
Labels: Episcopal Church, Homosexuality in the church

The Episcopal Church is further from God than the Mormons, imo. They're like the Unitarian-Universalists, basically not worthy of being classified with other churches.

The funny thing about these perverse groups is that, despite all their wickedness, they still mostly deny the gospel and teach legalism. They tolerate gross wickedness like homosexuality, but they still teach that you have to live a "good life" to get to heaven. Maybe a good life just means not having sex with animals or something! I have a friend in that church who has been fed works-salvation by them his whole life. When I've tried explaining the real gospel to him -- eternal security and all -- he seems to accept what I was saying, although it's kinda hard to be sure. Obviously, it's not a very healthy place for a person to stay.

I don't know how they can be farther from God than the Mormons. The Mormons do not worship God at all - their god is a man who lives on some planet out in space. An unbeliever is an unbeliever, whether a cult member or a church member or the man on the street with no affiliation - they are all far from God.